The Amazing Health Benefits of Spiralizing 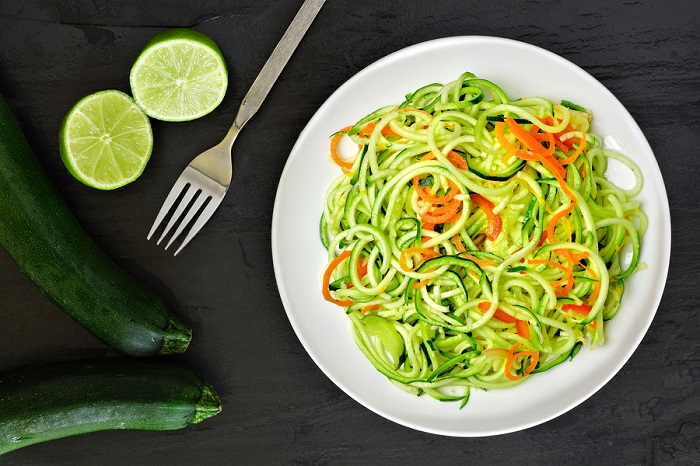 If you are not familiar with spiralizing, it is a process of making curly pasta-like strands out of vegetables through the use of a small kitchen appliance called a spiralizer. For about $40 or less, you can replace unhealthy pasta made from white flour or white rice in your dishes with healthier “pasta” from a variety of vegetables.

Your favorite entree, snack and dessert recipes can all be “spiralized” and made healthier. Do you have a favorite recipe that calls for rice? One way is to cut spiralized pasta strands into smaller pieces the size of a grain of rice and you have a rice replacement.

Trying to cut carbohydrates? Because you are using vegetables instead of pasta in your dishes, you are cutting down on the number of grams of carbohydrates (and ultimately calories) you are consuming, yet you are retaining the fiber and all of the good nutrients found in vegetables; fiber keeps you fuller longer, so you have less of a tendency to snack on unhealthy foods between meals.

The amount of carbs a food contains is often measured by its Glycemic Index Load (GL Load) value. For weight management and diabetes control, the goal is to choose foods with a GL Load of less than 20. For example, a serving of white spaghetti has a GL Load of 27 while a sweet potato’s GL Load is 17, making sweet potato pasta a healthier choice than real spaghetti.

But fewer carbs is not the only reason to choose vegetables over processed pasta. Each vegetable that can be spiralized has its own health properties. For example, sweet potatoes are high in vitamin C and iron which help bolster our immune system; beets help fight inflammation and lowers blood pressure. And of course if you are on a gluten-free diet, vegetable pasta is the clear choice.

Besides sweet potatoes and beets, zucchinis, cucumbers and potatoes are all great choices for spiralizing pasta, while broccoli and cauliflower can also make great rice replacements. However, vegetables is not the only food you can use. Some fruits, such as apples and pears, also work well in recipes. While most replacement pasta is cooked, you can also use it raw as a garnish on a salad or in Jello, similar to the way you would use shredded carrots.

If you want to “introduce” your family to spiralizing, try your normal spaghetti bolognaise recipe, but instead replace your regular spaghetti with a spiralized substitute and see if your family notices the change.

Spiralizing is a great way to eat healthy by replacing unhealthy white pasta and rice with ones made from vegetables and fruits.